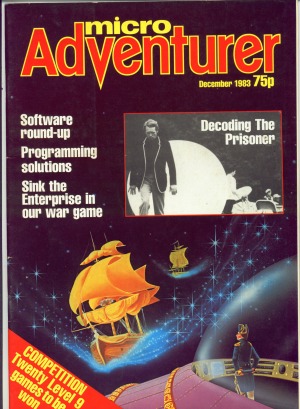 In November 1983, Sunshine books entered the magazine market with a new publication which was aimed solely at war gamers, strategists and adventurers. This was of course the late-lamented Micro Adventurer and it lasted for 17 issues. The March 1985 issue was to be the last, although no mention was made in the magazine itself. Its fate was revealed in Popular Computing Weekly a few weeks later, much to my own personal grief.

DESCRIPTION
In November 1983, Sunshine books entered the magazine market with a new publication which was aimed solely at war gamers, strategists and adventurers. This was of course the late-lamented Micro Adventurer and it lasted for 17 issues. The March 1985 issue was to be the last, although no mention was made in the magazine itself. Its fate was revealed in Popular Computing Weekly a few weeks later, much to my own personal grief.

Tony Bridge and Ken Matthews were the main writers, and each issue reviewed the latest adventure/war game/strategy releases on the Spectrum 48k, Dragon 32, Commodore 64, Oric, Apple, Vic 20 and BBC Micros. (For those of you not old enough to remember these wonderful beasts, they were collectively the most popular home micros in the early to mid eighties). In the first issue, the big news items were of the release of Oracle's Cave for the 48k Spectrum, and that Sherlock Holmes was to be the follow up to The Hobbit. Mention was also made of Level 9's newest game Snowball, which was to be the first part in a trilogy, and that they planned to release a game called Lords of Time!

As the Magazine matured, the type-in listings disappeared and the number of articles increased to fill the gaps. Further issues tried to decode the hidden meaning in The Prisoner TV series (a tenuous link but interesting never the less!), a chat with Mike Singleton on play by mail games, how to write your own adventures, how to write combat routines, the origin of role playing games, an interview with Scott Adams, artificial intelligence in The Hobbit, how to write a convincing plot, devising devious mazes, bringing back Blake's 7, an interview with Games Workshop, a look at flight sims, a detailed look at The Lords of Midnight, a chat with Douglas Adams etc. The average page count for an issue of Micro Adventurer (known as MAD to its readers) was around the fifty mark and it was printed on glossy paper. Each issue had a colourful cover, with some issues' covers more appealing than others and it managed to maintain a cover price of 75p until its demise.

To be honest, going through each issue has been a major nostalgia trip. Just seeing the adverts for some games brought memories flooding back. Anyone remember some of these jewels? Franklin's Tomb, Lost in Space and Fishy Business by Salamander (the Dan Diamond trilogy), Pettigrew's Diary from Shards Software, The Wrath of Magra by Carnell Software, The Ring of Darkness from Wintersoft, Valhalla by Legend, Tir Na Nog from Gargoyle Games, Steve Jackson's Sword Master series from Adventure International (which never appeared in the end), Eureka! by Domark, The Ket Trilogy from Incentive, The Greedy Dwarf by Goldstar, Macbeth the Adventure by Creative Sparks and many more besides.

Whilst it lasted, Micro Adventurer managed to expand on the adventure columns in other more successful magazines and dedicate itself to the genre. Without any sign of a similar publication on the horizon, it is left to the hard working people behind such home grown publications like Adventure Probe and Red Herring to keep the fires burning. Presumably, Micro Adventurer's circulation figure dropped to an unacceptable low. It might have something to do with the move away from adventures in the mid to late eighties. Thankfully, large role playing adventures and strategy games like Midwinter 1 and 2, Populous 1 and 2, Spellcasting 101 and 201, Shadowlands and the newly-released Legend have brought back commercial and critical success to the world of adventuring, so where there's money to be made, there's still hope.